The gathering of hundreds of anti-gay Jesus-flag waving right-wing “Religious Liberty” fanatics, were blessed with the presence of a virtual who’s who of “christian” Evangelical hatred in Kentucky today, including Sen. Ted Cruz, Tony Perkins. However it was clearly Mike Huckabee’s political three-ring circus. 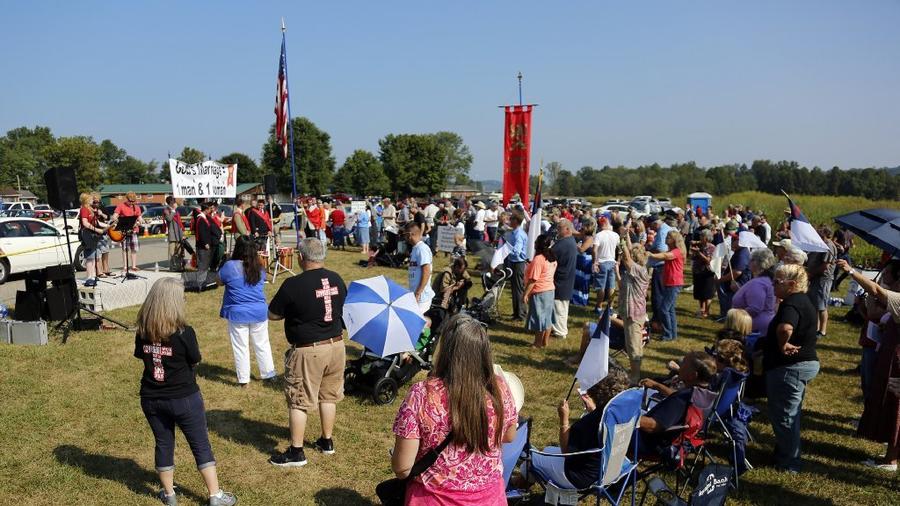 Before introducing Rowan County Kentucky Clerk Kim Davis to the crowd of Hateful Hucksters to the tune of “Eye Of The Tiger“, Former Gov. Mike Huckabee treated the fanatical audience to his skewed misinterpretation of the SCOTUS’ job description.

For those who aren’t political junkies:

Kim Davis has used the premise of so-called “Religious Liberty” to deny all couples, LGBT and straight, County marriage licenses to prevent Same Sex Marriages. In doing so:

At issue in Obergefell v. Hodges was the Constitutionality of the amendments to Michigan, Kentucky, Ohio and Tennessee’s State constitutions banning Same-Sex Marriage and specifically. The Court held that these bans violated the 14th amendment of the U.S. Constitution and were therefore Unconstitutional, saying:

Contrary to Huckabee and others’ assertions that the Supreme Court acted recklessly or without authority, Constitutional interpretation of laws is the most important duty of the Court. So much so in fact, that:

When the Supreme Court rules on a constitutional issue, that judgment is virtually final; its decisions can be altered only by the rarely used procedure of constitutional amendment or by a new ruling of the Court.

(I know that attempting to explain the basics of American Civics to the fanatical religious nuts is an exercise in futility, but we still must try.)

So, to summarize, Kim Davis was arrested and jailed for contempt of court for refusing to follow the laws and uphold the U.S. Constitution, as her duly sworn oath of office required her to do. She was not persecuted for her religious beliefs oand her right to religious liberty was not violated.

At the beginning of his stump speech, Huckabee said that Davis is looking forward to returning home so that she can be with her husband.

The question is, which husband? Number one, two, three or four?

Michael Brewer earned his degree in Political Science from the University of Pittsburgh but learned to love politics from working on local campaigns and LGBT Equality activism. He is a full time small business owner and part time Blogger. His most recent venture is The Liberal Brew - A Progressively Liberal news and opinion blog devoted to equality for all, returning sanity to our political discourse and restoring reason in America.
@@liberalbrew
Previous Fahrenheit 451 2.0: Censorship In The Age Of Google
Next Ted Kennedy Slams GOP GREED On Minimum Wage